CELEBRATE AND HAVE FUN!

She returned late last night after a thirty something hour travel.... you know, the planes, trains, and automobile thing.

I hope I can coax her to blog some about her trip on her blog. We talked all the way home from the meeting point about different things she did and saw.

She's gotten quite good at using chopsticks and developed a taste for green tea!

Next week, Lindsey leaves on a just as fun, but not as far away or quite as long a trip to Toronto. Some of you whom I know LIVE in Canada most likely don't think that is quite that exciting.... and certainly not as big a culture shock. But, she will have a great time.

On the return trip, they will stop at one of the world's wonders, Niagra Falls. I've always wanted to go to Niagra Falls.

Check out our house blog at www.fourteenofive.blogspot.com
5 comments
Read more
May 24, 2006

I know my posts have been of a very serious nature lately. I will try to lighten up but I felt compelled to share this. Kevin Carter was a photojournalist who won a Pulitzer Prize with this photo in 1994. He was in Sudan. The child was crawling toward a United Nations food camp, located a kilometer away. The vulture was standing by waiting for the child to die...

Three months after this trip, Kevin Carter took his life.

This was found in his diary , Dear God, I promise I will never waste my food no matter how bad it can taste and how full I may be. I pray that He will protect this little boy, guide and deliver him away from his misery. I pray that we will be more sensitive towards the world around us and not be blinded by our own selfish nature and interests. I hope this picture will always serve as a reminder to us that how fortunate we are and that we must never ever take things for granted.


It is my prayer today, that I too will be more sensitive towards the world around me, and…
7 comments
Read more

May 22, 2006
I had lunch with a friend today who is getting ready to go to Uganda, Africa for her fourth time. She asked for prayers for her trip.

I am amazed by what God is doing in her life.

Mother of two girls, and divorced only a year or two, my friend has felt a call on her life to minister to those beautiful people in Uganda. She started by going on a missions trip to Uganda by "accident" the first time. She had an incredible experience, and tells of the love of the people on the island she ministers. The first time she went, the entire island of people met her there, and greeted her with their chanting, dozens of children pulling on her fingers and saying hello to her..

I guess that's all I have to talk about. There is a lot more going on in our lives, really. Lots more!

I am so jealous as I search for photos on the internet to see where Haleigh is at. It is such a beautiful trip....

Right now it is around 6am Saturday in China. Haleigh is boarding a plane in Beijing and going to Hangzhou.
After lunch and checking in to the hotel, she is going to the West Lake.... doesn't it just look so incredibly beautiful?


After the West Lake, they are going to tour a Tea Plantation. DARN! Why didn't I tell her to buy me some tea???


They are staying in Hangzhou for 2 days, where on Sunday they get to tour a silk factory and the Gouzhuan. (Anyone know what that is?)
4 comments
Read more

a word from China

My world traveller emailed today... sounds like she is having a blast.

Hello family! I am in CHINA! it has been sooo much fun here- I have soo many pictures to show you. It has been a huge culture shock! It is sooo different here. The people are everywhere! Yesterday I saw the pandas -- fun! and had a duck dinner. Oh yeah the FOOD. Um its definently different. It really hard to get use to- really weird nothing like chinese at HOME! Very foreign. And its hard to eat with chop stick all the time-- ! It kinda reminds me of mexico in a way here but totally different. There are rural slums in the middle of the city. OYhh our hotel is AMAZING! we have robes and slippers and really nice! i took picture- we have a phone in the bathroom and the shower is glass! so thats fun. Well i dont have much more time- Im paying per minute so i gotta go i love you all and miss you!! Cant wait to show you the pics

She is going tomorrow to to the Great Wall and to tour a jade factory.
I keep kicki…
4 comments
Read more 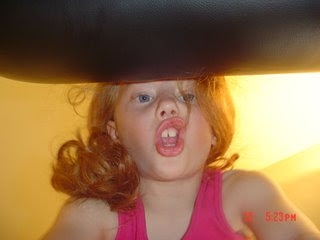 Emily (age 7) borrowed my digital camera. Crack me up!!! She took over 150 pics... these are some of the best.... she said she's going to be a "tographer" when she grows up.
8 comments
Read more

As I type and get ready to go to bed, my oldest daughter is eating lunch after touring the Imperial Palace in Beijing, China.....

After her lunch, she will go to Tian Anmen Square and the Beijing Zoo to see the Pandas...


After her trip to the zoo, she will finish the evening off with a Duck Dinner.
At that point, my guess is she'll resort to the saltines and peanut butter we packed in her suitcase two days ago... :)

Miss you Haleigh, have an incredible time!!!
8 comments
Read more

Things that made me smile today

May 12, 2006
Somedays I go through life and don't really appreciate the things that make me smile... so today, I decided to take notice of them.

1. A hot shower. There is something wierd and messed up with our crazy water heater. So, it's like winning the lottery if you are the one who gets to take a hot shower. I won the lottery this morning!

3. coffee. Of course. But, I must say that I might be able to admit that I make pretty close to the best coffee in town. Since we have no starbucks in our city, I'm pretty sure I would win that. A good pot of coffee just makes me happy!

4. my new umbrella. It was raining today so I had to run to Wal-mart and buy an umbrella so I didn't get wet. My old one was broken and had to be trashed. My new one - $3.96. And it is awesome!

My Word.a.Day calendar today has this word:
hir.cine (hur'seen) adj. Of or characteristic of a goat, especially in strong odor.

"My your hair seems hircine today!"

Nobody would truly know what you just said.
3 comments
Read more

in case you were wondering.... 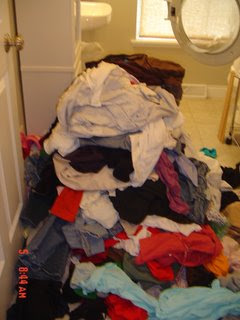