Showing posts from December, 2006
Show all

the cinnamon rolls were a huge success!

so much of a success, as a matter of fact, that they are all.... gone.
1 comment
Read more

December 27, 2006
I just realized when I was going through the blogs I haven't read in a while, that Mel tagged me for this. Heck, I'll play... it's 7am and I've been up for hours...nothing else to do right?


1. Wrapping paper or gift bags? paper.
2. Real tree or artificial? both...oh heck, three of each.
3. When do you put up the tree? the weekend after thanksgiving
4. When do you take the tree down? yesterday the real one, others, maybe after Valentine's Day... :)
5. Do you like eggnog? blech. does that answer your question?
6. Favorite gift received as a child? a tape recorder. my friend and I got one the same year.
7. Do you have a nativity scene? yes, one store bought, one kids made in school, and one girls made this year.... you're never too old for crafts!
8. Hardest person to buy for? father in law!!!!
9. Easiest person to buy for? emily - this year she had a list of 47 or more items.... now that's variety.
10. Worst Christmas gift you ever received? a blanket when I was a kid.…
Post a Comment
Read more

will this be success?

I couldn't sleep last night. When I can't sleep, I get up. I hate wasting my day tossing and turning when I have THINGS to do.

This morning, at 4:3o, I tried again. Different recipe this time... one from a great aunt of Shawn's from the family cookbook. Maybe it's a tried and tested recipe that has survived these years because of it's success! Besides, it says "Quick and Easy Cinnamon Rolls".

So, I activated the yeast, mixed the ingredients, kneaded the dough, let it double, punch it down, let it rest, rolled it out, spread on the goodies, …
1 comment
Read more

Wordless Wednesday - twas the night before.... 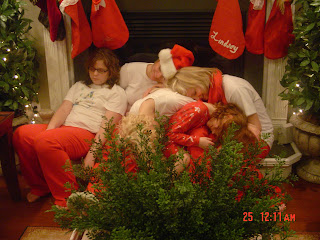 December 20, 2006
As I was baking cookies this morning, I thought about Christmas. I was singing Christmas songs... Joy the the World... and my mind went to a time 2000 years ago when a baby was born in a manger in Bethlehem.

I wonder what it was like when Jesus was born.

Did the world feel a moment or two of extreme peace and joy as Jesus took his first breath of life?
Did those gathered round gasp as they witnessed the birth of God in flesh?
Did they realize that this baby would be the answer to the sins of the world?
What was it like?
I imagine that heaven and nature did sing. The rustling wind, the trees ripple, ... did it stop and sing?
Somewhere in the world, did someone forgive a brother? Did a husband and wife find reconciliation? Was someone's heart softened, even for a moment?

I've experienced four births of my own children. The miracle of birth alone is incredible. The first breath of life.... is beyond words.

To experience the time when the Lord of the Universe, the King of Israel... took …
4 comments
Read more

December 15, 2006
I wish I had taken a photo of the paw prints that were on our front door the other morning when we woke up.... and on our back door... and our front window..... and all over the wood floor in the house.

I woke up in the morning and as we were getting the girls all ready for school and off, I noticed them. There was a trail of paw prints all over the house in a little trail like the "Family Circus" comic strip. At first I didn't realize what they were, and then I asked the girls...

One of our cats (the one that is afraid of the outside) had gotten out the night before and nobody noticed. In the morning when we got up, she was cold and meowing at the front door and when they let her in, her muddy paws (it was raining) left tracks all over.

It was two days before I had time to clean up the paw prints. But, I did it today. As I cleaned them up, I noticed there were paw prints all over the place. Every door, a couple of windows....

December 11, 2006
Okay, I know... I haven't posted in any consistent way for a LONG time. It really is inexcusable. What have we been up to?

Well, for one, we're on our fourth dance recital of the holiday season this coming weekend!

Secondly, we have been enjoying our super FUN advent calendar! Our family has an advent calendar made of fabric we hang on the wall with 24 pockets in it. Each pocket has a note inside that reads something fun we can do for the holiday season. Some are a lot of planning, some are spontaneous, and some are just "read a book"...

Okay, someone clearly wasn't thinking about that (hint: the mom!). It was a Sunday... not just any ordinary Sunday... but a Sunday in which we decided to sleep in and go to second service, I had to volunteer for 2 1/2 hours for a school function, and our entire family went to the school's madrigal dinner (all kids except 7 yr old involved), not to mention INSTE finals beginning…
3 comments
Read more

December 04, 2006
What American accent do you have?Your Result: The West Your accent is the lowest common denominator of American speech. Unless you're a SoCal surfer, no one thinks you have an accent. And really, you may not even be from the West at all, you could easily be from Florida or one of those big Southern cities like Dallas or Atlanta.The Midland Boston North Central The Inland North Philadelphia The South The Northeast What American accent do you have?
Take More Quizzes
2 comments
Read more
More posts