February 09, 2008
For quite a while, I've been trying to convince my husband that I - no WE - NEED a dog. I've tried various arguments and it just doesn't seem to work on him. Someone suggested I just bring one home like my friend's husband did... and I think after being married for 20 years, I've learned that isn't the way to win him over. (translated to: been there. done that. didn't work.)

We had a dog once. He keeps reminding me it didn't work. My response of course is that waaaaaaaaaay baaaaack then we lived in a 900 square foot bungalow with barely even running water. We have much more room now and plenty of yard for the sweet little bundle of joy to run around in.

He tells me we are gone too much. I tell him there are LOTS of workaholic families like us who have dogs and it works. really. well.

He asks me who will take care of it. To which, I of course, resort to the 9 year old side of me that says I'll do everything. I'll walk it. I'll feed it. I'll bathe it. I'll scoop it. You won't have to do. a. thing. To which of course, he knows, is so. very. untrue.

His birthday last week - I promised him I would get him a dog. Wouldn't that be sweet honey if I bought you a precious little puppy dog???? (grin)

I found out that our friends are going away for the weekend next weekend. They need someone to watch their dog. He wouldn't let me volunteer for fear that they would "forget" to pick it up.

This morning, I was telling one of the college students (see earlier post) about how much I would love to have dog. She said, all innocently "if you had a dog, wouldn't it's nails ruin the beautiful wood floor in your home".

My husband, knowing how obsessive compulsive I am about my floor, grinned from ear to ear. I think he felt like he had won the lottery in four states at one time.

Because, truthfully, it did make me stop and think for a minute.

2nd Cup of Coffee said…
Oh can I say that I have been down this road! My husband dragged his feet, but he is very indulgent of me. So we got our little 5 lb Yorkie. He has never adjusted to it, just doesn't like animals in the house. But she brings the kids and me lots of joy, just not him. Honestly, it has been a source of conflict. Good luck with your decision!
Saturday, February 09, 2008 2:58:00 PM

Sing4joy said…
T - I saw that you stopped by my blog, which is full of lots of dogginess these days. Here's a little of my opinion to take or leave as it pleases you....the only place I've ever received unconditional love besides from my dogs is my Heavenly Father. They are always willing to be my companion even if I have ignored them for way too long. But this relationship comes at a high price. A dog is a HUGE commitment. Not only do they make messes, chew things, have to be cleaned up after, eat a lot, have vet expenses, scratch things like floor, walls, doors and furniture, but they have emotional needs as well. 'Making it work' isn't really the ideal situation for bringing an animal into your family. Not ideal for you, and especially not ideal for them. And I won't even address the issue of introducing them to a marriage where both spouses are not on the same page. Ick. what a boring comment. I'm usually much more entertaining than that!Sorry...
Saturday, February 09, 2008 4:11:00 PM

Ann said…
It would it would it would, T. Your floors would take a serious beating. Unless you are obsessive about walking it all the time so the pavement will wear its claws down or if you're willing to trim them. Or letting it live outside in a kennel/run with cement, which wouldn't be very nice in the winter time. Not to mention they shed a lot, unless you get a hairless one or a little fee fee dog like a pom or a bichon frise (little fluffball doggies are cute!)

melanie said…
i was the one who didn't really want one, because i still have one toddler to potty train, and enough messes. and he is lots and lots of work. but, i do think that you have to research what type of dog best suits your family, their needs as a breed and their breed personality type. i have been in gorgeous homes that have dogs.
and crates are their friend!! as mean as that sounds, it's ok. it's a boundry thing!! i think it is a fun thing that can draw a family together, as choatic as it is.... keep praying... keep thinking...
Monday, February 11, 2008 8:11:00 AM

Anonymous said…
I think Melanie has some good advice, speaking as someone who didn't want a dog, the type you get makes a big difference, also training is your friend. A well trained dog is a joy to have. I hate dog hairs, but have found if you choose dogs that need grooming (ie-NOT a short hair) they are not a problem at all for shedding. Although you have to count the cost$$$ for grooming or do it yourself. We opted for TWO, so they could keep each other company when we're gone for a couple of hours, but if you're gone for a weekend, you gotta have a dog sitter. I love our little dogs, but in all honesty, with the kids leaving the nest, and fewer feet to help:), we probably won't get another when their little span has ended:(
Monday, February 11, 2008 10:23:00 AM 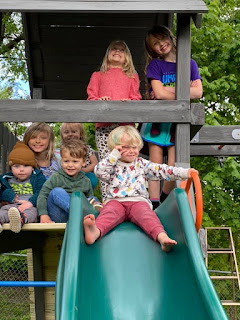